Press Record: The Making of Remainder-Repeater

Upon first reflecting on Hardcore punk today, I couldn’t imagine myself viewing it from any other space than from within the crowd, surrounded by jostling, moshing, noisy people with an even louder, more raucous band on stage. I wanted to convey the emotion of being within the crowd into something both visceral and tangible, something that could present a current state of punk and the original hardcore all at once. We focused more on the youth culture of Hardcore in class, so I also wanted to present the sound of Hardcore. Still, it would touch on that social perspective within the crowd. The perfect medium for this was a cassette tape mix. 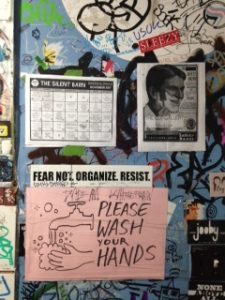 To make it, I brought together together 11 different recordings, mostly from live shows as well as a few produced tracks that fit the theme or gave a pointed sense of difference to this mixtape. These tracks included a Fugazi live show, a live recording of a Bad Brains song, and show recordings of current artists a friend made in Seattle and gave me permission to use. I also recorded a recent punk show in Brooklyn that I went to with a close friend I hadn’t seen in some time, which made this project all the more personal for me. From these recordings, I digitally spliced and mixed the various tracks into one long track and recorded it onto a cassette. I purposefully included moments of yelling, of talking over the music, and of the crowd noise in between sets. 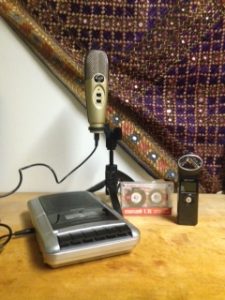 The camaraderie in the Hardcore scene was much of what we discussed in class and much of what I found fascinating about this DIY, youth-empowering movement. I tried to reflect that in my mixtape, through the distortion of the noise of the past meeting the present and the connections therein. The tape moves from the modern technology to a past analog form, communicating sound across platforms and distance, to be shared with others after this project is over and to play on and on and on. 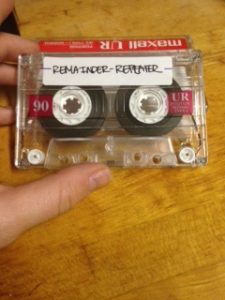