A self-standing wall, modeled after the remnants of CBGB and respective venues, bears the brunt of disenfranchised youth. This is a simulation, a cheap imitation, of the hardcore punk scene which encourages viewers to navigate through the imaginary ruins of what once was. Band logos { empty symbols }, flyers { advertising non-existent events }, and other remnants of the past adorn the wall as a playful homage. A collection of images and content imitate relics of the past: this is included, but not limited to miscellaneous graffiti, paint splatter mimicking bloodshed that reflected bold aggression which feeds into the scene, and fragments of a non-existent play that stand as critique towards the hardcore punk scene itself. An exemplified détournement stands still. As the spectator, the viewer is held ransom in an attempt to decipher the code. You won’t understand, but you’re invited to take a piece along the way. 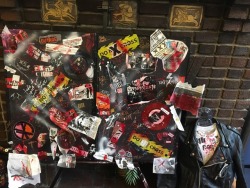